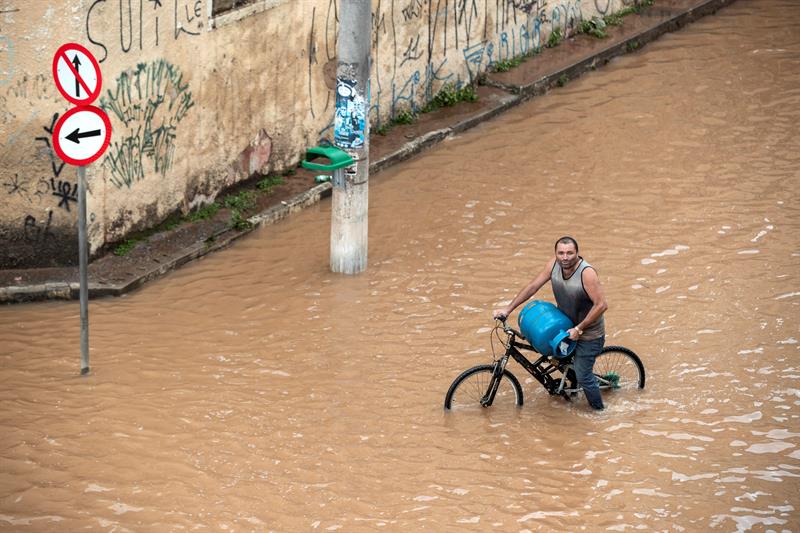 The fire department said that four members of the same family died after a house collapsed due to a landslide in the industrial suburb of Ribeirao Pires, while two children died under similar circumstances at other spots.

Six other people drowned in floods caused by torrential rains that began after midnight Sunday and left a trail of destruction in parts of a metropolitan area that is home to more than 21 million people.

Fourteen people were injured and three were reported hospitalized, including a child who was badly hurt when he, his sibling and their mother were caught up in a mudslide in the east Sao Paulo neighborhood of Sao Rafael.

The storm's greatest impact was on the eastern and southern sides of the city and in the so-called ABC industrial belt.
Entire neighborhoods were completely covered by water after several rain-swollen rivers burst their banks.

The situation forced firefighters and other first responders to use inflatable rafts and helicopters to rescue residents cut off by floodwaters.
At midday, people were still huddled on the roofs of buildings awaiting rescue.

The fire department said that nearly 80 trees were toppled and though they did not cause any casualties, some roads were blocked, while 76 landslides were reported.

The rains shut down the main routes into the city, notably Avenida Estado and the Marginal Tiete expressway, submerging dozens of vehicles.

Downpours were forecast to continue throughout the day and authorities issued a weather alert. In the space of 12 hours, Greater Sao Paulo received a third of the rainfall it would normally get in the entire month of March, according to the Emergency Management Center.

A month ago, a storm in Sao Paulo took the lives of four children, including an 11-month-old baby, who died in the metropolitan region due to landslides caused by heavy rains.
This latest round of torrential rains also affected Rio de Janeiro.
mat-as/atru/dr